Want to Be More Confident? Start Acting Like It 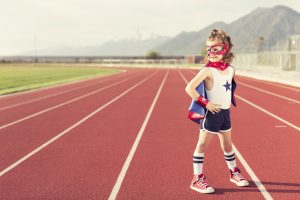 Ever heard of the phrase; “ just fake it ‘til you make it.”?

Sometimes when I talk about this idea with my athletes they say, “Yeah, but Carrie, I still don’t believe it.” And what they mean is, that they don’t feel it. When we talk about confidence, it’s often a feeling that we are after. You want to feel grounded, calm, self-assured, prepared, ready for anything. Sometimes when they don’t “feel” something immediately, they think it must not be working.

The idea of “fake it ‘til you make it” came from the theory of the self-fulfilling prophecy. This theory posits that if you are told something enough times you start to internalize that message, turning it into a belief that eventually comes true. From the self-fulfilling prophecy we eventually came to the idea of “act as if”; if you act as if something is already true, it will eventually become true. It’s like an actor preparing for a role. They become this new person by thinking about their mannerisms, how they walk and move throughout the world, their attitude when they interact with others, etc.

“I pretended to be somebody I wanted to be until finally I became that person. Or he became me.” Cary Grant

Confidence is a verb. We have to make this mindset shift and think of confidence not just as something you feel, not just as something you are, but something you do. Confidence takes action and acting confident isn’t just in your thoughts; it’s also in how you carry yourself. Amy Cuddy’s TED Talk on “How Body Language Shapes Who You Are” (I mentioned her work in a previous blog post!) explains how your body language can influence your feelings of confidence and that you aren’t faking it until you make it, you are faking it until you become it.

How you carry yourself affects how you feel and how others perceive you. Imagine a competitor conveying their lack of confidence in their body language. They might be moving sluggish with their head hanging down or they might be stiff and full of anger… what do you think about your competitor in that moment? If you want to be the athlete to beat, carry yourself like you are the athlete to beat. This is different than being cocky. This is allowing your body to send the message to your brain that you can do this. When you hold yourself with confidence, you start to feel more confident.

Start paying attention to how you carry yourself. What does your body language look like after a success? After a mistake? Then start to pay attention to the athletes you admire and watch how they carry themselves. During your next competition, think about how you can carry yourself with confidence from the moment you start preparing for your event through the end of your competition.

Some people get stuck on the idea that pretending is lying … if I “pretend” to be confident, I’m just lying to myself. Pretending, or ‘acting as if’ is different than lying. Lying is based in deception. Pretending is trying something out to see how it feels. It is also way to tap into something inside of you that is already there, but feels foreign or uncomfortable because it hasn’t been a part of you that you’ve brought out. You haven’t been practicing “feeding the athlete”, so now you’re trying it on, feeling it out … like an actor getting into character.

Give yourself a time frame – just try it out. And then keep trying it. Until you become it … and it becomes you.